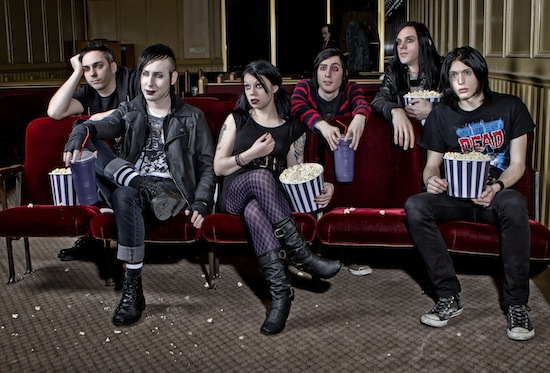 The Birthday Massacre formed in 1999. Rainbow and Chibi met while studying fine arts at Fanshawe College in London, Canada. Aslan was also attending Fanshawe Collage and became roommates with Rainbow the same year. Soon after, the three began writing and recording songs. Michael Falcore was at that time studying video production in Toronto and writing material of his own. M.Falcore and Rainbow had known each other from childhood and material that M.Falcore had written was brought back to London, where songs such as “Over” and “Remember Me” were recorded. The group then decided to form a band, which they named Imagica. In mid 2000 Dank joined the group on keyboards. After a year of practicing and writing songs, the band played their first gig on October 28th 2000 at Diversity night club in London. The band released a seven song demo CD at the show.

O.E who was also attending the same college saw the performance and the following month joined the band on drums. The band was now a solid unit and began developing a small fan base. They launched a new website and got the attention of local press. They continued to play live into the fall and then spring of 2001. Realizing the potential growth of the band, in the summer of 2001, it was decided that they would relocate to the largest city in Canada… Toronto. At that time the keyboardist, Dank decided to leave the band.

In September 2001 the band relocated to Toronto to record a new demo. A five song demo was released and on December 20th 2001, the group made their first live appearance in Toronto at The Reverb. By this time the band was building a massive international fan base through word of mouth and the internet. They went on to play several more live shows in early 2002 and began work on writing and releasing a new CD.

In the spring of 2002, just before releasing their CD the band was blown a devastating hit. The name Imagica was being used by a band with similar spelling. It was decided in the interest of the band to change the name and to avoid unnecessary legal conflicts. After several weeks, the group decided on the name The Birthday Massacre. Their song of the same title was renamed “Happy Birthday”.

In July 2002 The Birthday Massacre independently released their new CD entitled “Nothing and Nowhere”. The CD contained nine songs and was manufactured in a limited edition. By the end of the summer of 2002, The Birthday Massacre were getting 1000’s of hits on their website, 100’s of plays per day on MP3.com and a web ring of fan sites spurting up across the internet. Their live video for the Nothing and Nowhere track Video Kid had also become a huge success.

In the fall of 2004, TBM’s live keyboardist Adm left the band to pursue his own musical career. Taking over for him was Brett from Aphasia (now known as Lye). He filled the role for the rest of the tour.

Around that same time, things were starting to kick into gear with the International TBM camp, with The Birthday Massacre signing onto the German label, RepoRecords. A few months later came the release of Violet in Europe with bonus tracks from Nothing and Nowhere. A re-release of Nothing and Nowhere also went on sale in the United States and Canada in the fall of 2004.

The very next year, TBM shot a video with director Daniel Ouellette for the song “Blue,” which was released to the public in June. While many saw this as the band’s first music video, they had shot a handful of live videos before. In fact at this point, the band has been long time friends with Toronto film maker Steve Jones. He’d produced their original Video Kid video, and was also the mastermind behind their in-studio performance video for “Nevermind.” In August of 2005, TBM fans were able to view these videos at home in the bands very first DVD release.

The Birthday Massacre introduced a new keyboard player from their hometown of London Ontario named O-En. Not only was he from London, but O-En also attended Fanshawe College (where the band was originally conceived). On June 17, 2005 they were signed to Metropolis (a United States record label out of Philadelphia, PA). Violet was remastered and released world wide under the label.